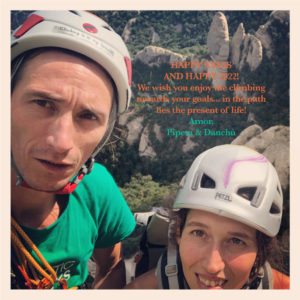 Alejandro Pellegrino (Alias ​​Pipeta), born in Argentina and resident on the island, a long-standing mountaineer who began his activities in the distant Austral Patagonia in 1998. TD3 climbing technician and member of the A.E.G.M (Spanish Association of Mountain Guides ). Creator of the first climbing school in Ibiza and the Balearic Islands, creator of the Pitiuso climbing championship. Opening of a large number of sport climbing routes and traditional climbing in Ibiza and promoter of the Ibizatitanium project for the renovation of dangerous routes, collaborating closely with the FBME and the EBAM on the UIAA studies on the corrosion of marine anchors for climbing and informing the climbing community of all the news regarding safety and precautions on marine routes.

In 2005, he founded El Club d’Escalada d’Eivissa with which he promotes the municipal school of San José, training athletes and the general public, promoting climbing in all its forms under the slogan of respecting the environment and the sacred places to where climbers venture in their practice.

In 2014, together with the artist and climber Karina Danchú, they created IbizaVertical Center, which promoted a philosophy of life where climbing and the arts went hand in hand for the integral development of people. The center was permanently closed as a result of the Covid 19 Pandemic in the hope of finding a public space to create an Olympic climbing center on the Island.

Karina Danchu, assistant guide, artist, photographer and climber born and living in Ibiza, begins climbing at the age of 14 at Ecole d’Humanite, a school in the Swiss Alps whose teaching philosophy has been of great influence in applied and developed didactics. at Ibiza Vertical Center during its existence. Teammate of Alejandro P. for more than 13 years with whom they carried out great activities in Yosemite, Patagonia, Alps, Dolomites, Pyrenees, Monserrat and who together were winners on the three occasions that they attended the Rally Championships 12 hours of Climbing of Spain in the mixed category. Teacher and guide of the Ibiza vertical center and the Eivissa Climbing Club for 7 years, deputy director of the municipal climbing school of San José during its existence, in charge of its didactic programming, indoor competition outfitter (route setter), Active official re-equipping of rock routes and specialist in marine environment, design and climbing wall projects.

She currently provides her services jointly with Alejandro with whom they form a duo that makes the activities they design more than just climbing.